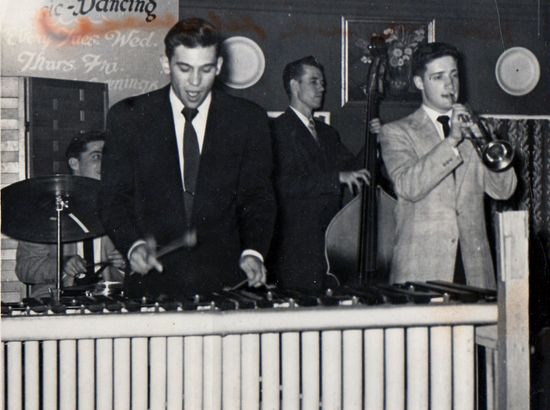 I was lucky to have been raised on Music. My father played marimba and organ in a three-piece jazz combo, The Versatiles, for thirty years- that's a photo of them from the 50s!- and my mother has been singing in a church choir her entire adult life. All of my Dad's siblings- and most of my Mom's- sang as well, so family functions were always (literally) filled with harmony. It was only natural then that I would want to sing and play Music, and my father started teaching me on our livingroom piano when I was very young, about 5 years old. I took formal lessons from second grade through high school, and later played in several local cover bands- from Tymz Up and Off The Record to The Band Intense and Beatles Juice- all around the Cleveland area for more than 20 years before deciding to concentrate on my original music.

In 2009 I released a four-song sampler, and finally, in late 2011, I completed my first full-length CD, watertalk.

On June 1, 2013, I released a second full-length CD, Twenty Twelve, the Musical tracks of that last circle 'round the Sun.

All Three CDs are available at shows, on iTunes and at amazon.com. Please have a listen- here, there, on Spotify or on Facebook!

In the Spring of 2014, I was selected as a Feature Artist on No Cover Live- an Original Music/Live Performance online streaming site. Check it out ♪ http://www.nocoverlive.com/faanitakeys.php

On January 5th, 2015, Crisis Chronicles released  #THISISCLE, An Anthology Of The 2014 Best Cleveland Poem Competition at Mahall's in Lakewood. Lyrics to my song Downtown are included in this collection ♪ Here's the song, from my Dreamsongs and Misfits CD: 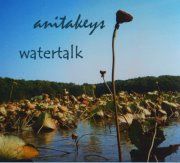 anitakeys, a melodic, poetic keyboard player/singer/songwriter, performed all around Cleveland in cover bands for more than 20 years- in RUMOR HAZIT, TYMZ UP, SHOOTER, OFF THE RECORD, THE BAND INTENSE, and BEATLES JUICE- from Shooters on the Water, Rumrunners, Biggies and The Basement- as well as at Riverfest- in the Flats to The Round House in Put-In-Bay. after a successful couple of decades, anita decided to focus on her original material, performing solo- initially- and then with a band as anitakeys and friends, at THE BARKING SPIDER TAVERN, BROTHERS LOUNGE WINE BAR, THE CABIN OF WILLOWICK, EUCLID CITY LIMITS, VINE AND BEAN CAFE/BON VIVANT, ROCKEFELLER'S, JILLY'S MUSIC ROOM, ARTS COLLINWOOD CAFE and WILBERTS.

anitakeys and friends is a group of talented local Musicians: Ryann Anderson on bass, Lorne Patrick Franklin on percussion and Quinn Sands on backup vocals, hand percussion and rhythm guitar.

anita released her second full-length CD of original songs, twenty twelve, in June 2013! Both bassist Ryann Anderson and percussionist Lorne Patrick Franklin- the usual Friends band- play on this release, and there are guest appearances by J. Scott Franklin (trumpet on serenade of the sky) and Reginald "Reggie" Redd (saxophone on butterflies). both of those songs are  included in the player at the bottom of the home page.

BIG THANKS to all who joined us for my 2014 BirthDay Tour June dates at the Tremont Farmers Market and Rockefeller's and- in 2014 & 2015- Barking Spider Tavern and The Brothers Lounge Wine Bar!

anitakeys and friends presented our third CD: Dreamsongs and Misfits, in September 2014 ♪  anita, Ryann and Lorne are joined by Quinn Sands on harmonies, guitar and hand percussion and Tony Kazel on Drums in a (Very Exciting First-Time Experience For Us!) LIVE RECORDING of 14 more all-original songs. You can find ALL THREE CDs right here in the Store to your Left, on iTunes, and on Amazon.